Bootstrap 3: An Ever Lasting Legacy for Responsive Designs 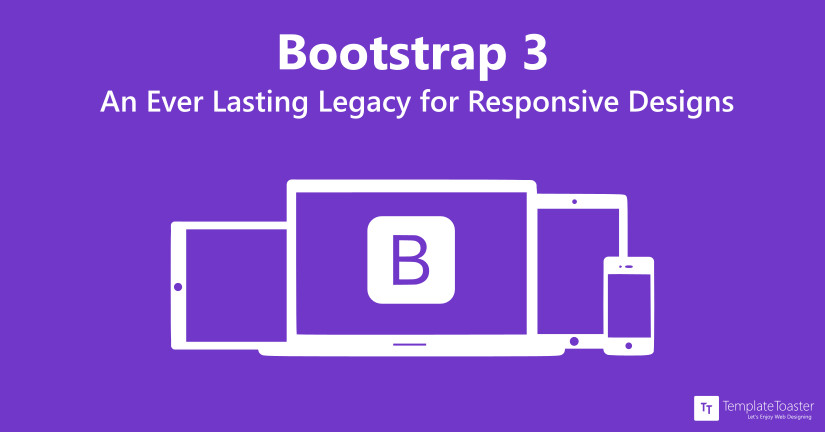 Ever wondered the amount of wonders Bootstrap 3 did? Ever imagined it to be loved even by now? Here’s a quick follow up as to what and how it happened.

Bootstrap is one such well-known term in the web world that every web designer and developer is supposedly aware of. And if you’re living under a rock then, we highly recommend this extended section to you.

Bootstrap 3 framework is no less than a progeny of the Bootstrap team. It was released as one of the earliest “mobile-first” frameworks. This version was charged with responsiveness. It was mainly designed to be aptly adjustable on any screen size. It’s device-friendliness acted as a game changer, thus providing it with an edge over other available frameworks in the web market.

Why use Bootstrap 3 as a Responsive Design Framework?

In order to design a website, every project requires a responsive framework. With Bootstrap’s flourishing community, it seems plausible to adopt Bootstrap as the desired framework. Its most stable version in the recent past has been Bootstrap 3. All the websites deserve to be decently exhibited on all major web browsers. In fact, Bootstrap 3 framework’s familiarity also plays a major role. Since it is a well known Responsive Web Design (RWD) framework, it becomes easy-going to even get newbies on the work. This can result in an enhanced speed of the entire project as well.

Bootstrap 3 exudes plenty of features which have been, by far, considered no less than avant-garde in the web development and designing field. This framework took the world by storm because it offered features which had never been offered before. The predominant features of this framework are highlighted below

The bootstrap framework provides you with a basic, ready-to-use code template, having CSS, JS etc. files. This tends to relax your design process by saving your time to write cumbersome code again and again for each website/project. In order to bring uniqueness to your website, custom styling can serve your purpose as per the requirements.

This feature aims at bringing a better display opportunity for websites. It simply means that websites designed using this particular framework will be responsive to mobiles as Bootstrap 3 got released specifically as a “mobile-first” framework. In simpler words, you can control its outlook when viewed from desktop, tablet or mobile.

Bootstrap 3 framework provides a key function to design using grid approach. This system aims at adjusting the content flow on the website. It does so by designing columns and letting them condense down in order to fit into the screen. There is maximum 12 number of columns that are provided.

Bootstrap can never be easily dethroned. Its immense popularity has been spread throughout, so much so that the entire technical realm has heard of it, at least, once. It’s usage and research rapidly evolved after the release of Bootstrap 3 framework. This version seemingly brought a significant change and manifested it an edge over other available frameworks.

Bootstrap has been widely used, this statement cannot be questioned, that’s for sure. Even the below-provided chart talks about the rise in the development of websites using Bootstrap. 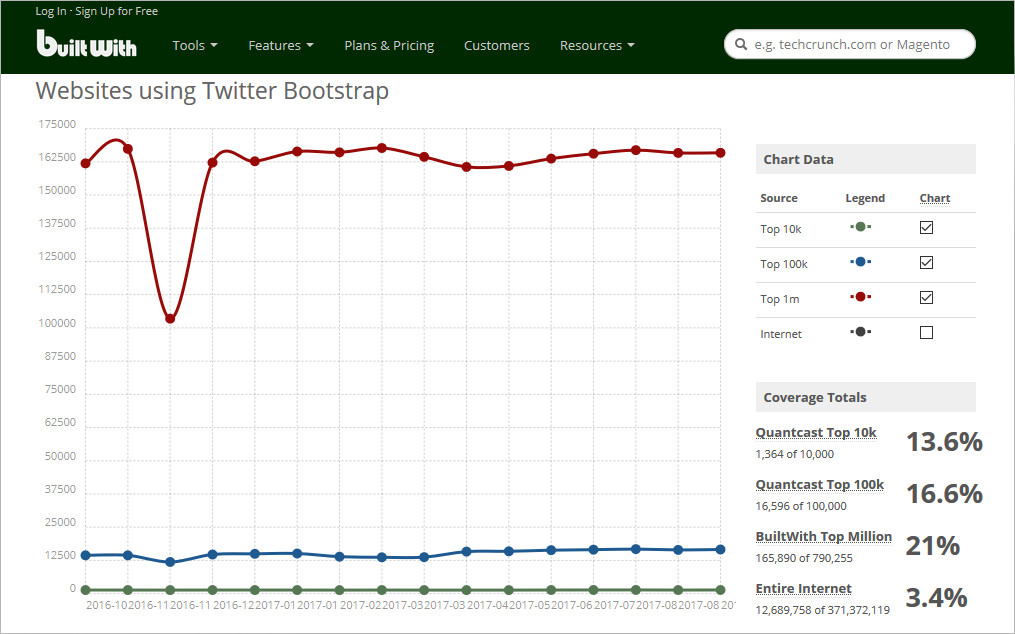 As it is precisely mentioned in one of the OStraining’s post “Bootstrap’s Popularity Grew 1,000% in 3 Years”. They provide many specific statistics from 2013-16. These facts capture the entire process through which Bootstrap team thrived to reach this stage.

Although this success was quite possibly predicted in their previous post titled “The Bootstrap Boom is Just Getting Started”. This can be a remarkable observation done back in 2013. Here, they had mentioned that Bootstrap was the most forked on GitHub.

Even Wappalyzer have provided the statistics in which Bootstrap has been entitled to the biggest market share.

One can easily understand that Bootstrap’s aim was not just to revolutionize but to make strong hold on the market. In such a manner, that it’s grip only tightens. They entered the market with only one superior and single-most intention and that is, to stay. And Bootstrap 3 framework has persisted on maintaining its market dominance like a Boss!

Popular sites which got Bootstrapped!

Bootstrap 3 gave tough time to other frameworks, yes, that point stands irrefutably. In fact, it’s a perfect choice because it is developer-friendly and ultra-responsive. Hence, many beautiful websites have been designed and created using Bootstrap 3 framework.

How does it work? (If you weren’t still into it)

Bootstrap generated web page enables one to split the content into 12 columns, at the most. This can also be shortened to 6, 4 or 2 columns based on the device you are viewing the website on. To encapsulate it in one word, it creates a ‘responsive’ design. This ensures that the website appears phenomenal on any of the device, whatsoever. The grid system that Bootstrap possesses; control its layout and help in further adjustments if required. This grid system has four classes, namely, ‘lg’ for larger desktops; ‘md’ for desktops; ‘sm’ for tablets and ‘xs’ for mobile phones. This grid layout enhances the content flow of any website. 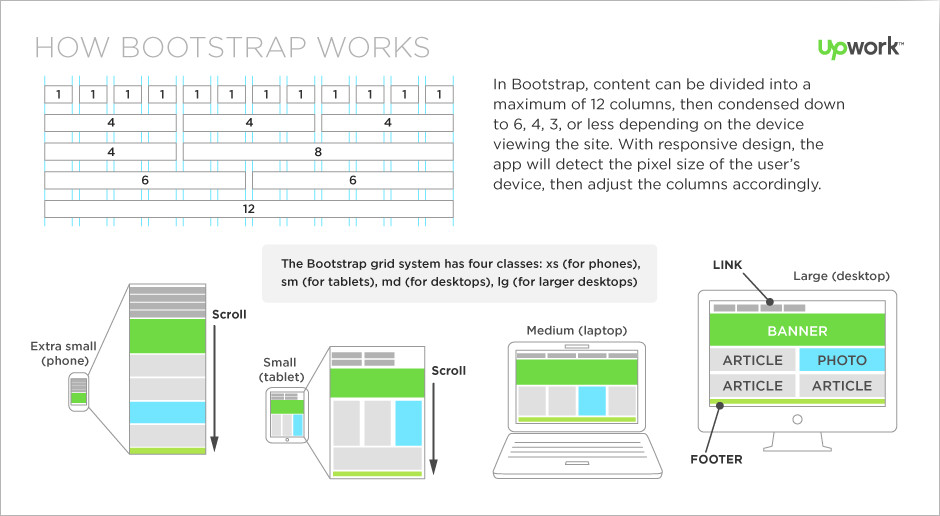 How to use Bootstrap 3 Framework?

Bootstrap 3 framework brought an upheaval since it is both easy and powerful. This combination is highly contagious in the IT world. Mainly because it attracts not just amateurs but professionals as well. This framework’s functioning can be condensed down to these following steps;

You are supposed to have some basic knowledge of HTML and CSS, in order to initiate the process. And obviously, a code editor to begin with.

There are two types of Bootstrap files available to download. One is compiled and the other is a source file. The compiled files are preferably downloaded more since they are ready to use.

While kick starting the designing process, you are required to design your first web page in a basic HTML file format.

Before you think you’re done with the process, you should know that the above-generated file needs to be saved on the desktop your computer specifically with a .html extension.

For a detailed functioning of a Bootstrap file, you can refer to this page.

Throughout the post, Bootstrap’s familiarity has been fairly understood and judged. We can very easily put our stakes on it if there comes a time. Bootstrap is a sure shot winner in this sprint among all the well-known frameworks. Although, Bootstrap team had decided to cease the development of Bootstrap 3 in order to bring more of their focus to the latest version i.e., Bootstrap 4. And, the community was initially stirred by this announcement. But as the Bootstrap 4 development started, people took it positively and supported it. But there is a chunk of community that still uses Bootstrap 3 and even prior versions. And even people tend to suggest learning Bootstrap 3 before 4, as it provides some learning experience. As, even if, Bootstrap 4 is changed, it wouldn’t entirely dump the core concept of version 3. Hence, the fact stands irrefutably that Bootstrap 3 is still ruling the market.

Being said that, if you still think not to delve into much coding and don’t wanna miss out on Bootstrap’s functionality, TemplateToaster, a Bootstrap Based Website Builder software is here to serve the purpose for you! It is one such web design software that implements Bootstrap and makes it effectively accessible. Hence, making it fairly easier to deal with and deliver responsive results.

We would like to hear your take on Bootstrap 3. Kindly hover down in the comment section and pour in your wisdom.